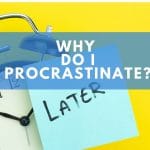 Why do I Procrastinate?

Why do I procrastinate? If you have accepted that you are a procrastinator, there are many reasons that you do it. You may do it for entirely different reasons than those listed, but for most people, they fall into one or more of these reasons for procrastination.

Why do I procrastinate? If you notice you’re procrastinating, missing deadlines, pull a lot of overnighters, it’s essential to figure out why you’re doing it to yourself. Once you do, you can address those issues and overcome procrastination tendencies.

Find out more about working on your procrastination and time management

BOOK: Recommended by Martin Eat That Frog by Brian Tracy

How to Build a Resilience Mindset

How do I break bad news to someone?

How do I break bad news to someone?